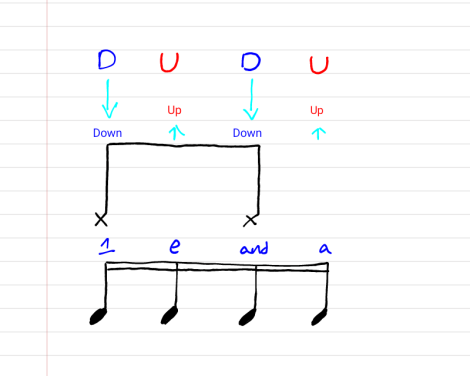 As a kid I remember listening to Metallica’s song Sad But True and learning that awesome drum intro at the beginning. It took me a while to get all the parts in order and Boom! I had it. But the hardest part was just ahead and I didn’t even realize it. After the pause and the wonderful snare fill Lars curates at the beginning, the verse plays for 4 measures and on the 5th measure you hear it… It’s the “one e ah” on the kick while keeping those eighth notes steady on the hi hat. You probably know exactly what I’m talking about if you know the song and also if you’ve ever encountered this. Lets check out that part below. It happens at 00:33.

When I played “one e ah” on the kick my hi hat hand followed my foot. No independence at all… It was so tough to get my hand to keep those eighth notes straight. I’m sure I was thinking “man there has to be a shortcut to this”.

Let’s take a look at the part I’ve transcribed below.Without the kick on the “e” and the “ah” this would just be a simple rock pattern with the kick on one and three and the snare on two and four.

Now let’s look at how the DUDU method works. No it’s not the “doo doo” method… The (D) indicates Down and the (U) is for Up. This is the motion that your hi hat hand is creating on each stroke but implying the up stroke as a placeholder. Play the eighth notes such as “one & two & three & four &” as downstrokes and the sixteenths such as “e” and “ah” as up strokes. Start off at 30 BPM so that you learn the mechanics of this exercise in a clean manner. This exercise covers every possibility with sixteenth notes on the kick. Don’t forget to count out loud!

Time to apply the DUDU method to our Sad But True transcription. In this case we only have to worry about those two sixteenth notes at the beginning. Start slowly and give your hands time to line up the Up strokes with the kick on the “e” and the “ah” then progress to a faster tempo.

Hope this simplifies things a little to help you gain more control over your bass drum independence and gives you a better understanding of how to fit the kick into the sixteenth note grid while holding a steady ostinato overhead. As you progress with this method know that the robotic movement of Down and Up will become more fluid and simply blend into a natural movement that is less stiff visually. This is simply a starting point to grow from.